The 1940s and the first half of the 1950s were a period characterized by the incessant search for a new socialist art that was to be humanitarian, focused on people, and capable of depicting the creative experience of the postwar period as well as the spirit of the construction of the communist order in Poland.

Looming over this section of the exhibition is a portrait of the Marshal of Poland Michał Rola-Żymierski (around 1946-49). On the surface, its form is reminiscent of the monumental representative propaganda portraits that artists produced in Lviv under Soviet occupation (September 1939 – June 1941). Contrasting with this piece is Nadia Léger’s Stalin and a Pioneer Girl (1953), a painting that combines the self-evidently propagandistic subject matter with modern, Légerian figuration.

This contrast serves to remind us that beyond what Maryla Sitkowska called the ‘sleek servility’ of official Socialist Realism in the 1940s and 1950s, there were also efforts to adapt a number of aesthetic trends, from synthetic realism to contemporary art, combining such forms with the desired ideological message. Therefore, thinking in terms of Socialist Modernism is particularly productive because it does not completely reject the socialist and Socialist Realist art that emerged outside what Polish art history considers the mainstream, namely contemporary art. On the contrary, this approach demonstrates that there was a significant degree of dialogue between the Socialist Realists (such as Helena Krajewska) and the contemporary artists (such as Marek Włodarski) on the level of artist practices and ideological attitudes.

A significant portion of Marek Włodarski’s works of the late 1940s and early 1950s should be positioned on the broader level of socialist art (rather than in the much narrower realm of Socialist Realist art). The formal diversity of Barricade and the various takes on construction sites show that he consistently took up the ideologically correct theme of (literally and figuratively) building socialism, including the realization of the Five Year Plan and collective labour, while at the same time applying highly synthetic figuration that limited the depictions to what was absolutely essential for emphasizing the content of the composition.

Barricade (1937–1950–?) is a “fluid painting” that appeared in many different versions. It is an exceptional bridge that reaches beyond the caesura of the war years to also connect the engaged art of the 1930s with the Socialist Realism of the late 1940s and early 1950s.

The initial canvas from 1937 refers to the Bloody Thursday of 16 April 1936, when demonstrations during the funeral of the Lviv worker Władysław Kozak were violently suppressed. Barricade was destroyed by the artist during the war when the Nazis entered the city in 1941. However, the fate of the painting came to be mythologized. In his recollections following Streng’s death, the painter and artist’s friend Ignacy Witz presented an idealized image of his colleague as an artist who ‘never looked back’ and who created a number of political paintings that were deemed degenerate art (entartete Kunst), ‘burning for three days as they were crushed onto the pyre’.

Włodarski returned to Barricade in a tempera version from 1948, combining an ideological message with contemporary figuration. This was all the more evident in the prize-winning canvas painting that was put on show at the First National Art Exhibition (1950). On the one hand, Barricade can be considered the most powerful piece of evidence showing that he acquiesced to the demands of Socialist Realism. On the other hand, it also demonstrates his ambivalent stance towards the movement. Indeed, the canvas painting as exhibited is only known from a reproduction in Przegląd Artystyczny [Artistic Rerview, nos 3-4, 1950]. At some point following the exhibition, though, Włodarski repainted the canvas, eliminating the most realistic details and simplifying the forms, thus giving the composition a more Modernist feel.

The married couple Helena Krajewska and Juliusz Krajewski were on the frontline of Socialist Realism’s incursion into Poland. Marek Włodarski had been a student of Léger and doyen of Modernism. It is thus hardly surprising that they were perceived as being on opposite sides of the barricades. However, they had a great deal in common as far as the aesthetic styles they all adopted in the 1940s (synthetic figuration) and, most importantly, their artistic attitudes were concerned. Using broad strokes in his representations of numerous construction sites and workers, Włodarski depicted the essence of good, collective, socialist labour, just as Krajewska did in her crisp images of steel mill workers. Krajewska and Krajewski did not renounce in the 1940s what was later discredited as harmful formalism, instead they employed it in the search for a new artistic language. Juliusz Krajewski distanced himself from simple ‘mechanical resemblance’ instead stressing that ‘each epoch has its own realism’ (Realizm i abstrakcja [Realism and Abstraction], 1947). Helena Krajewska, meanwhile, praised the deformation of form as a way of emphasizing the ideological message (Ludzie pracy oczekują swego Wergiliusza [Working People are awaiting their own Virgil], 1948). Her perspective was thus aligned with the views of contemporary artists par excellence, including Henryk Stażewski, who at the same time was explaining the role and necessity of ‘Deformation in art’ (Deformacja w plastyce, 1948) to the readers of the influential periodical Kuźnica [Ironworks].
Show description
close 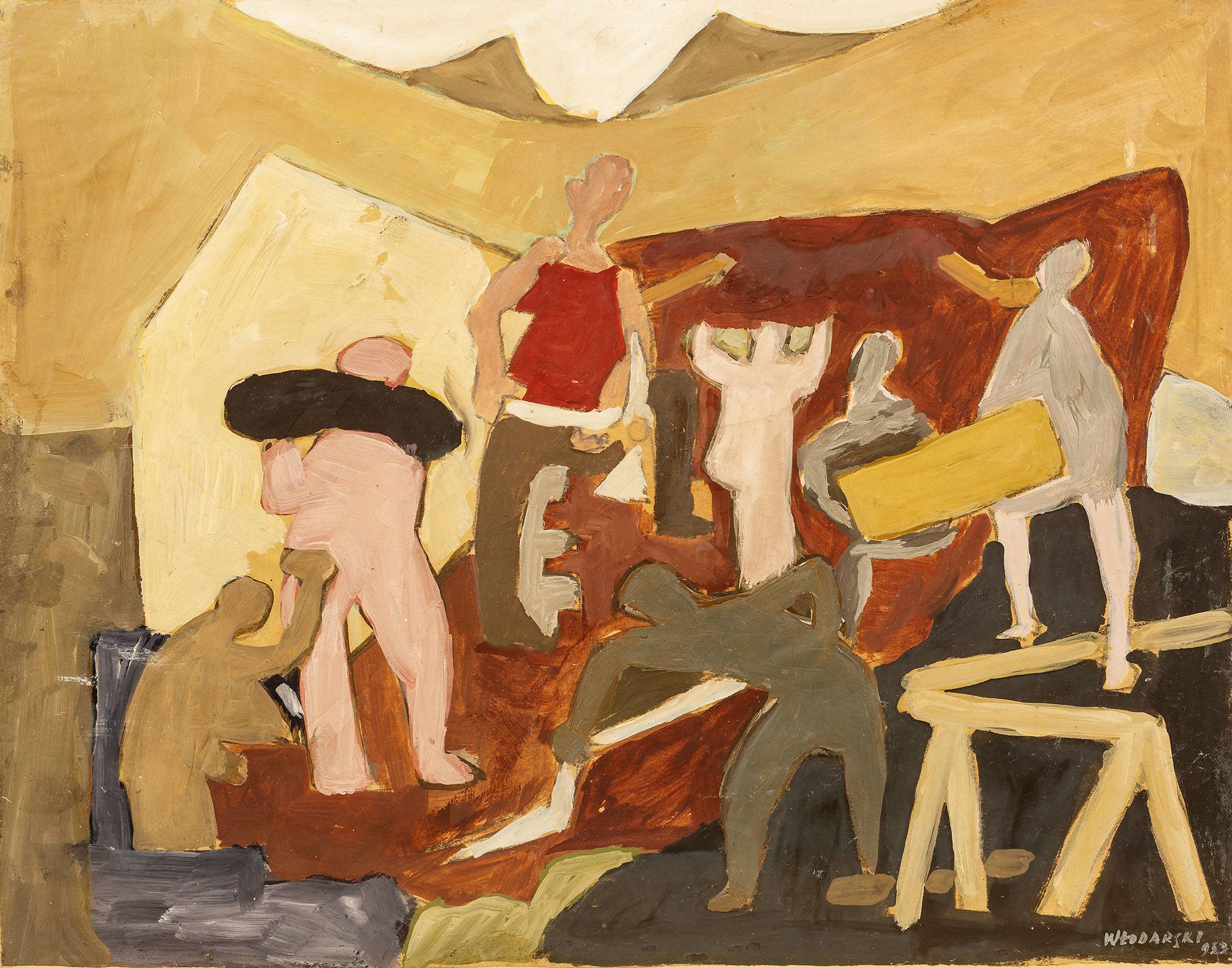 4. REALISM AND THE AVANT-GARDE
6. WAR AND HOLOCAUST IDENTITY